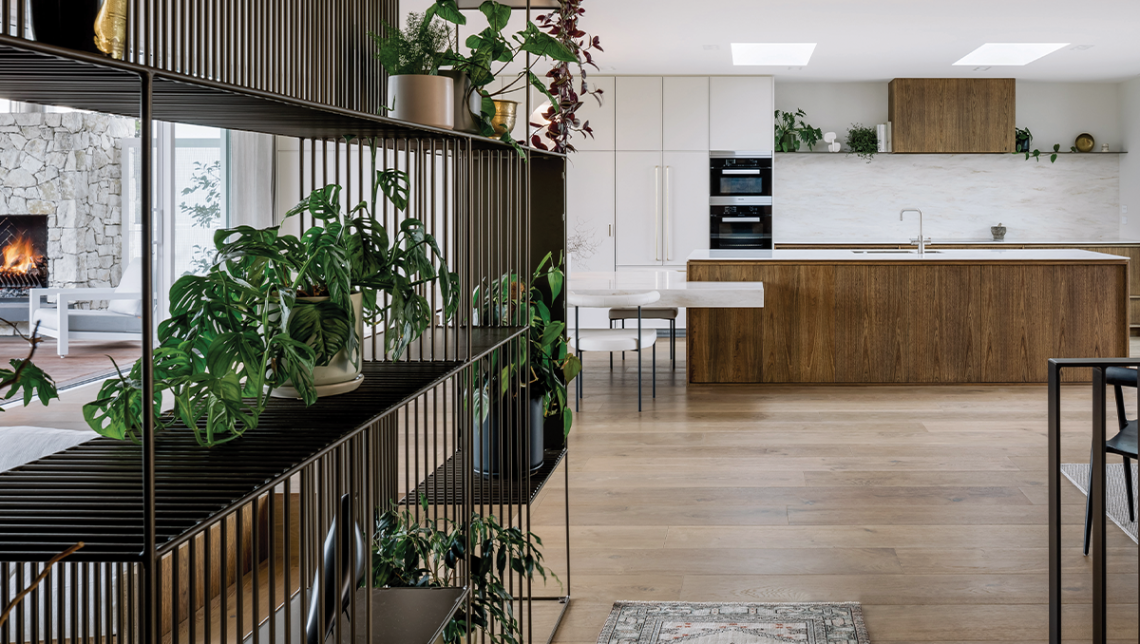 Rounding out the regional rounds of the 2021 ADNZ Resene Architectural Design Awards, the Waikato and Bay of Plenty regions came together to celebrate their incredible entries on Friday the 15th of October.

Werner Naude of DCA Architects of Transformation won three awards for two projects. He won the Regional Residential New Home between 150m2 and 300m2 Award for a home titled ‘Black Gables’ and a Highly Commended Award in the Resene Colour in Design category and the Regional Commercial Interior Award Sponsored by GIB for his work on ‘Te Arawa Media’.

‘Black Gables’ is a single-family home with three gabled volumes that are tiered down a sloping site and nestled softly into the landscape. The home features a master suite, kids’ bedrooms, open plan kitchen, living and dining and includes a guest accommodation, study and double garage. The client is an accomplished joiner by trade and so requested a design based on Passive House principles including air tightness, maximized solar orientation, centrally mounted windows and super insulation to create a warm, dry, healthy home that their family could enjoy for generations to come.

‘Te Arawa Media’ is a new multimedia studio fit out design that creates a space that is welcoming, relaxed, social, open, flexible and connected, while also celebrating the Te Arawa people and their unique culture and history.

Adam Taylor of ata won the Regional Residential Alterations and Additions Award for his work on the renovation of a “beach shack” project in Papamoa titled ‘Over the Fence’.

Taylor says the clients wanted to celebrate the existing relaxed character of the home, not re-invent it.

“They appreciated small space design and blurring space boundaries. The existing house, albeit tired, was a typical two-bedroom Beasley with small living spaces. The brief called for a master retreat and additional living space. As creative clients, they wanted their beach shack to evolve to suit their young family and better engage with the sunny yards. As we lived over the back fence, we knew the site well and quickly understood the dynamics of how they wanted to live,” says Taylor.

Waikato’s Tane Cox of Red Architecture won two awards for a beautiful bush home in Moonlight Bay in Raglan. He won the Residential New Home up to 150m2 Regional Award and a Highly Commended Award in the Residential Interiors category.

Designed for a small, seaside site at Moonlight Bay, the brief was for a refined, enjoyable, flexible, and robust dwelling. Design considerations included maximising the small site, managing the steep contour, sheltering from the predominant westerly and creating spaces that were suitable for adults, kids and guests to occupy. With this brief in mind, a home arranged as a group of small pods was created. The four pods involve a series of decks, and the house is clad in stained cedar and bare hardwoods. Careful consideration was taken by Cox to ensure the home nestled into the site and that its palette was considerate to the immediate environment to ensure its visual impact was minimal.

Noel Jessop of Noel Jessop Architecture won two awards for two unique projects. He won a Commended Award in the Residential New Home between 150m2 and 300m2 category for his work on a ‘scales’ clad family home in Hamilton titled ‘S & P House’. He also received a Commended Award in the Commercial/ Industrial category for his design of ‘Crestline’ in Hamilton.

The standout of Jessops S&P House is his use of creative cladding, which judges described as bold.

“It is a bold idea. Here we see the intersection of daring geometric forms and the use of materials that are rough juxtaposed with smooth. The plan is simple and effective and has been successfully executed. This project inverses our expectations with the heavy rugged form straddling the lighter material base. It is tasteful, controlled and well planned,” said the judging panel.

Daniel Cullen of Cullen Keiser Architecture Ltd won the Regional Residential New Home over 300m2 Award for his design of ‘Amongst the Trees’ located in Te Miro, Waiapa. Located on a steep bush-clad site in rural Cambridge, this family home had to be designed to suit the steep contour of the land and carefully placed so that it would not disturb the protected fauna located around the site. The building also needed to be positioned in a way that would give the home access to the incredible views of the surrounding native bush and the Waikato farm lands.

Darryl Church of DCA Architects of Transformation won the Regional Commercial/Industrial Award for his design of Leith Place in Tokoroa. The Leith Place redevelopment needed to include 80 carparks, a space for community events, a space for artworks, a new public toilet building and bus stop with a shelter located off State Highway One. But it is much more than this. ADNZ judges said it was a project that had the potential to reactivate the local precinct.

“This smart design for a public toilet is based on the idea of the Southern Cross constellation as a navigation device and transforms the functional elements into a distinctive structure. This happens especially at night when the basket forms cast an intricate play of shadows into the surrounding area. Light and form have been used effectively as a beacon,” they said.

Dean Baldock of The Architecture People won two awards for his work on Que Bar in Cambridge. The project won a Commended Award in the Commercial Interiors category Sponsored by GIB and the Regional Resene Colour in Design Award.

Drawing inspiration from moody bars found on the streets of Singapore, the client’s dream was to turn a poky former hair salon into a sophisticated, hole-in-the-wall wine bar in Cambridge. Set within an existing character style building, within a tiny 36m2 area, the design needed to accommodate as many people as possible while also delivering on practicalities and living up to the initial vision.

At the centre of the space is a custom-designed bar, with a tiled curved and stone benchtop complemented by bespoke above-bar shelving and vertical brass storage beyond. A thoughtful use of dark colours and textural materials ensures the space feels intimate, but never cramped. Pairing existing aspects with a modern colour gives the bar an industrial edge.

Congratulations to all the 2021 regional winners. The national winners of the 2021 ADNZ Resene Architectural Design Awards will be announced at our national award celebrations via livestream and at regional events  on Friday 29th October.