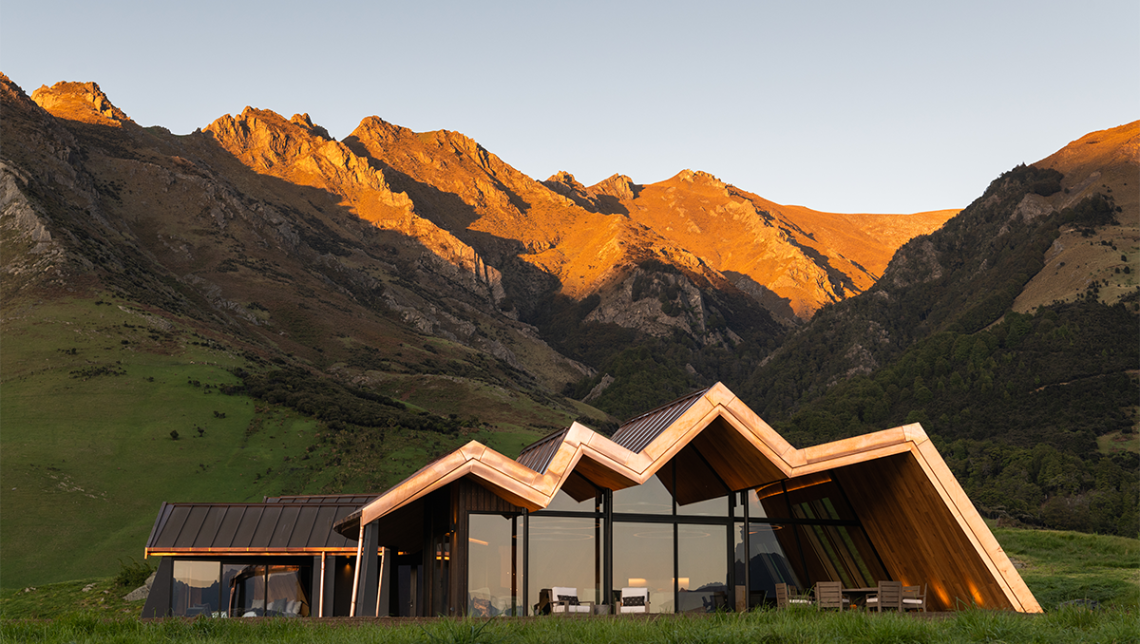 'Mt Isthmus Lodge' by Tony Butel of Ground Up Studio. Photography by The Lindis Group.

Although a little later than we had hoped, we were finally able to celebrate the 2021 Otago/Southland Regional ADNZ Resene Architectural Design Awards on Friday the 1st of October in Dunedin.

Bevan Wood of Eco Workshop Architectural Studio and Richard Wilden of Richard Wilden Design won two awards for their work on a clever rental housing development titled ‘Glynllifon – a collaboration’. They won a Commended Award in the Residential Interiors category and the 2021 Regional Residential Multi-Unit Dwelling Award Sponsored by MiTek.

The project, located in Dunedin Central, is an exceptional collaboration to transform some very basic timber products into a delightful ensemble gracing the Dunedin city skyline. Consisting of two rental units, the project sits snugly onto an impossibly steep and difficult site. The building forms part of the answer to Dunedin’s critical housing shortage.

The two rental units push the limits of size at 35m² and 24m² respectively and provide accommodation within a five-minute walk of the city centre. The buildings discourage car ownership and encourage social interaction with the proximity of bars, cafe’s, theatre and shops, adding to the vitality and density of the central city.

ADNZ judges said the project was a fantastic collaboration.

“The designers, the artists, the builders, it is a fantastic collaboration. A particular strength of this scheme is the micro planning of tightly organised spaces designed for a tricky site. The result is a finely crafted sustainable solution where every space has been carefully optimised,” said the panel.

Mike Stevenson of Stevenson Design won the 2021 Regional Commercial/Industrial Award for his work on the ‘New New New Residence’.

The is a futuristic brewery and residential project where a two-storey historic façade has been retained with a new three-storey building behind. A simple offset cuboid form assists with integrating modern into historic while also being sympathetic to the original façade. Composite aluminium split into a random pattern clads the cube form giving the first glimpse into the unique apartment interior.

Judges said the project was a playful design, with a complex and intriguing layout.

“An unexpected use of fluorescent light and colour gives this boutique hotel an ethereal quality. These surprises are all hidden behind the original façade,” they said.

Mt Isthmus Lodge is a four bedroom home built on the desire to create a challenging sculpture building referencing Zaha Hadid’s extraordinary Riverside Museum in Glasgow and directly inspired by the local surrounding mountains. The interior finishes were kept to a very limited palette with heated, polished concrete floors through the hallways, stairways and living spaces. To complement this simplistic floor palette, Ground Up Studio selected Haro Fumed Oak engineered flooring to clad almost all of the interior walls and ceiling, ensuring the dramatic forms would blend seamlessly and flow throughout. The interior doors were also selected to match the walls and to remain cohesive with the palette.

There is very little to distract you from the curving angular form of the building with the ceiling and walls almost entirely clad in oak. The finish required hand shaped mitres and obtuse curved angles and is an expression of craftsmanship which is seldom seen.

Juan Ignacio Puricelli of SUR Architecture Ltd received a Highly Commended Award in the Commercial Interiors Category Sponsored by GIB and a Regional Resene Colour in Design Award for the fit out of The Meat Preachers in Frankton’s Five Mile development.

A clean, slick and modern design fit-out, it features a splash of clean, modern tiling with stainless steel for food preparation, combined with the warmth of plywood.  This is set off by the graphical creations of local designers Makebardo. It adds up to a striking serving and dining setting that fits with the exposed mechanical and electrical services of the mall’s industrial style.

Resene judges said the soft timbers, natural lighting and sleek, structural steel nestle together to create a home of sophistication within the trees.

“The natural colour palette grounds the home within its raw, natural environment. Modern décor completes the scheme in a variety of earthy, natural hues,” they said.

Gary Todd of Gary Todd Architecture won two awards for two unique projects. He won a Highly Commended Award in the Residential New Home between 150m2 and 200 m2 category for his work on a contemporary single story eco-house with views of the Clutha River Valley titled 'The Gums House'.

Gary also  received a Commended Award in the Commercial/Industrial Category for his design of a boutique, modernist style, EBB hotel located in Dunedin Central.

Congratulations to all the winners of the Otago/Southland region.

Regional ADNZ Resene Architectural Design Award celebrations will be taking place throughout the month of August with the     National Awards Gala    being held on Friday the 29th of October 2021 in Dunedin.